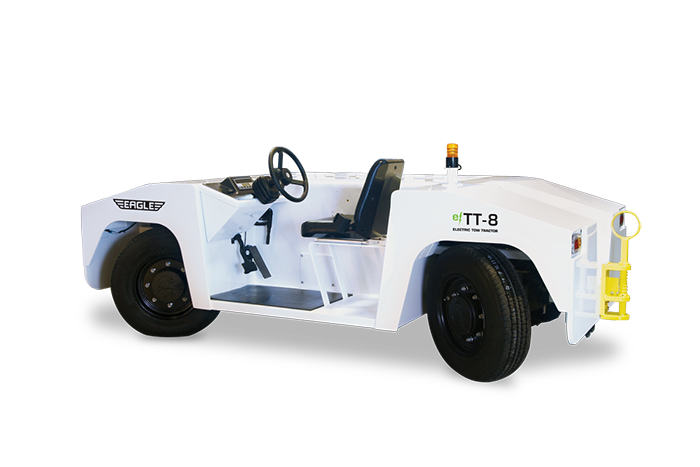 With 8,000 lbf. DBP, and a standard Four-wheel Drive (4WD), Four-wheel Steer (4WS), 80V A/C drivetrain, the Eagle eTT-8 tug was designed to move large-cabin business jets such as the Falcon 7X and G450 and regional jets such as the CRJ-700 in all weather conditions. Zero emissions and all-wheel drive are just a couple features the eTT-8 tug boasts.

The eTT electric tow tractor series are the next generation of Eagle TT Series aircraft tractors. The eTT series offers the same features as the All Wheel Drive TT Series that set them apart from their competition, such as front and rear sight tunnels for direct hitch visibility, an ergonomic operator compartment, and unmatched reliability and performance. The eTT-8 tug stands amongst this electric aircraft tug line from Eagle Tugs with incredible power with zero emissions. The eTT Series are Four Wheel Drive (4WD), which offer customers superior traction in all weather conditions. Additionally, the next generation eTT Series are equipped with Four Wheel Steering (4WS) for exceptional maneuverability. To top it all off, the eTT Series are powered by an environ­mentally-friendly 80V A/C electric drive. Engineered to meet the needs of today’s regional airlines, corporate flight departments, fixed base operators and military flight operations, the Eagle eTT Se­ries 4WD/4WS aircraft tugs pack a significant amount of value into a low profile, compact package. Learn about all the features of this model below and be sure to browse Eagle Tugs other aircraft towing options.